Having returned recently from a residency program in Germany, writer, artist, theatre practitioner, Nashilongweshipwe Mushaandja has deepened his research and practice intersects on activism and movement formation. 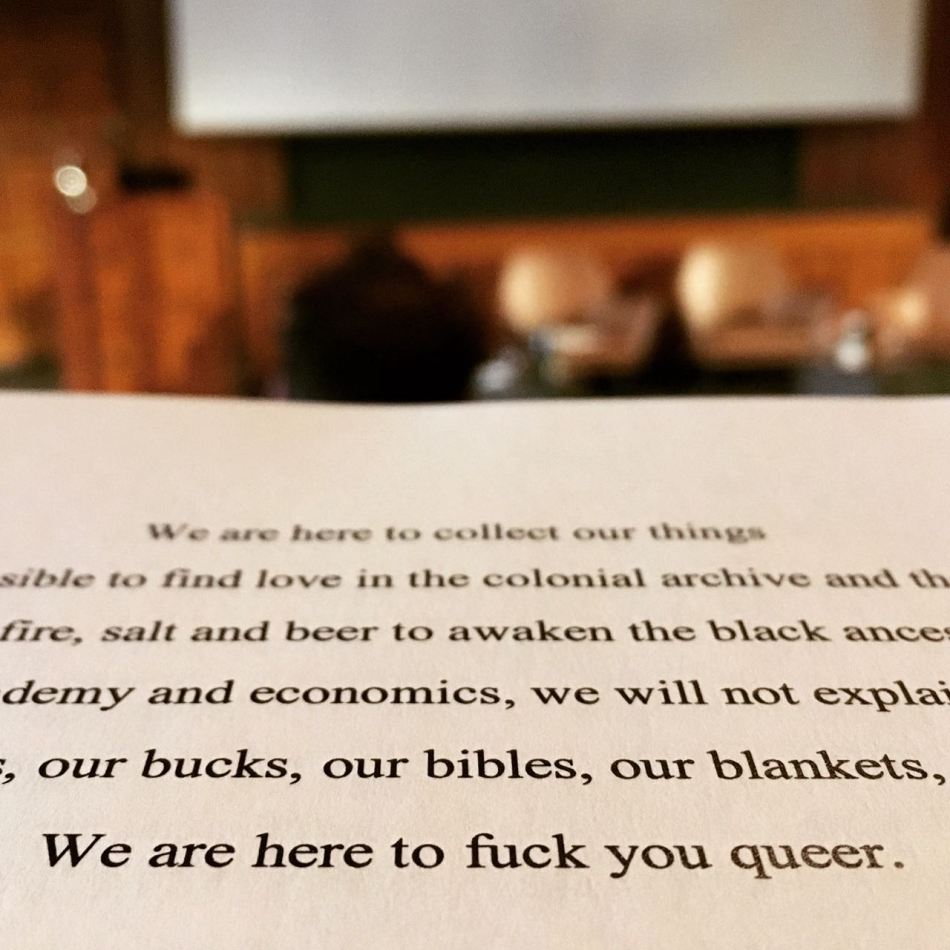 Mushaandja strongly believes theatre can help us polish our skills to be disciplined and reading theatre-makers. He says arts education, in general, is an important field that is generally undermined in Namibia. As a scholarly-artist, Mushaandja is always concerned not only at how many formally and informally trained artists we have, but also the low level of art knowledge production locally. 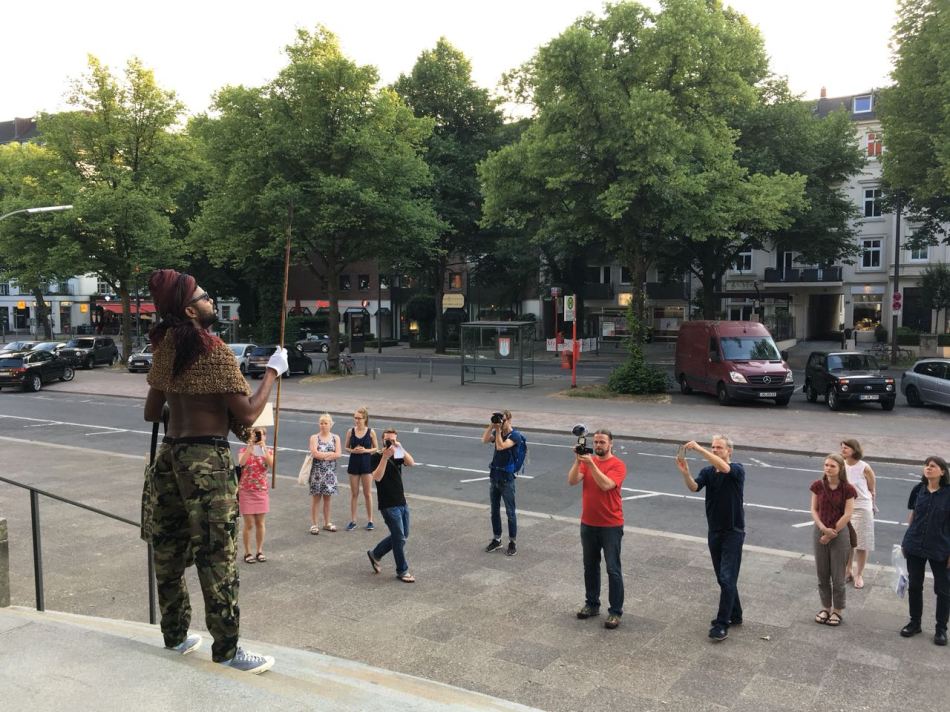 “It’s not just about studying theatre and performance, it is also about producing and documenting knowledge that is relevant to the local context and obviously decolonizes,” Mushaandja says.

He sheds more light on the survival of theatre and writing in the Namibian context:

1. How realistic should a theatre production look?
I am not a fan of realistic productions because I feel that Namibian mainstream theatre is often stuck in this realism thing. Perhaps there is no one answer to this question because theatre is a creative praxis and every theatre maker has a different approach. I am however a fan of theatre that is deeply authentic to its context. I am a fan of theatre that breaks the rules of conventional theatre that transgressed boundaries, the theatre that is interdisciplinary and offers a new language of African theatre. This is not to say that theatre that does not do this is not realistic or good, this is mere preference. In general, theatre must help us connect, heal, imagine and transform our society.

2. Is it important to always keep producing new ideas or is it best to exploit existing ideas?
Absolutely new ideas. Especially for the Namibian context and where it finds itself 28 years of ‘freedom’. I always argue that freedom is not reflecting on our learning and culture. There has been a lot of recycling of old and foreign ideas. Old ideas can also be useful if approached with new energy and innovation.

3. Why should we care about the arts?
Imagine a world without the arts. I don’t wanna live in that world.

4. What are your thoughts on contemporary Namibian theatre? 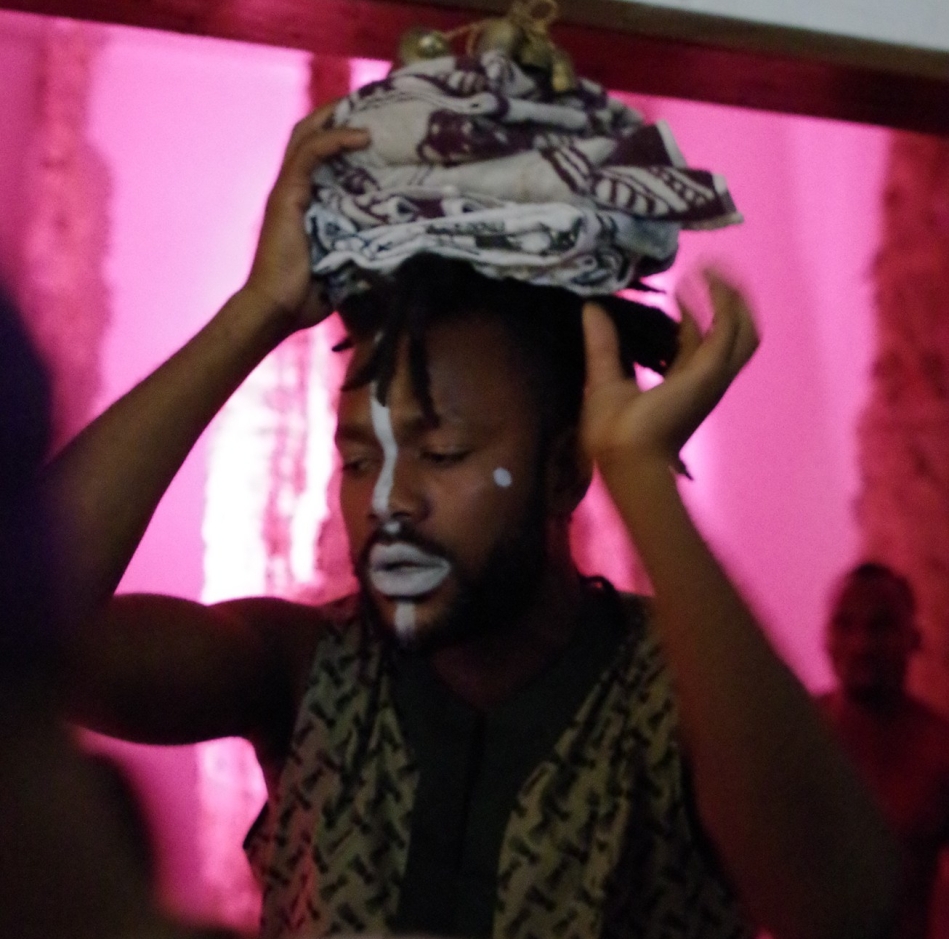 (Image by Britta Hars – performance of Mind your own closet at the Brazillian Cultural Centre in Maputo Mozambique)
It has come a long way. Having spent over 10 years in local theatre now, it is good to see audiences change and grow. I love that it is youth-driven. But something is to be said about the disappearing veterans of the theatre. What happens to most of them? Namibian theatre lacks innovation and critical engagement. I am still looking to see work that does not necessarily follow conventions of the black box. Theatre that is not script-based or top-down. Where is the theatre that explores new forms of publicness? Where is the cutting edge work?

1. What, in your opinion, is the great Namibian Screenplay/Stage play of the last decade?
I don’t have one yet. There are many:
• Eenganga: Translations & Trance Formation which was my MA creative research work.
• Tselane & The Giant by Veronique Mensah
• The State of Citizenshi.ph.t by myself & Oupa Sibeko
• Anima by First Rain Dance Theatre
• Ovakwanaidi by Tuli Mekondjo

2. What are the elements of a good play?
A play that shows authenticity, locality, participation, agency, transformation, voice, disruption, and openness, border crossing, vulnerability, critical consciousness.

3. What would you most like to see young writers learn from the writers of the past that you feel is lacking today? 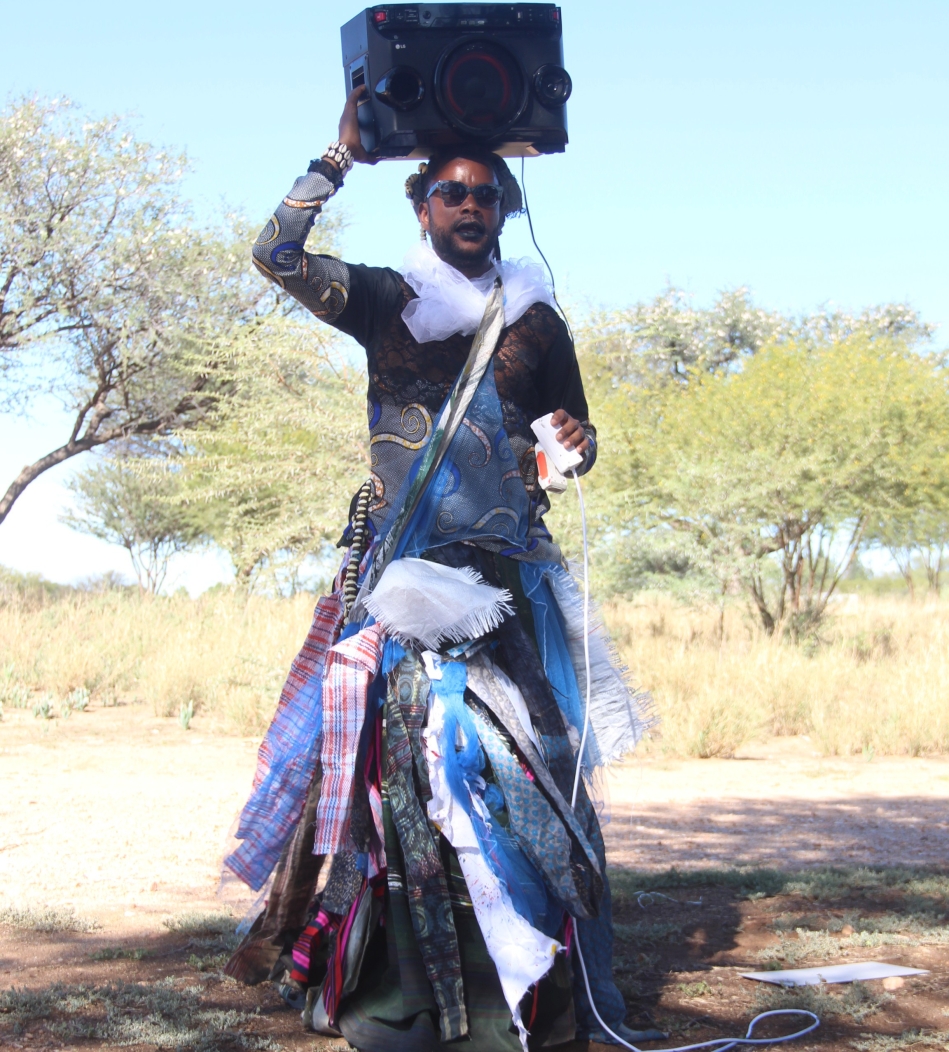 (Image: by Valide Hidinua & Mathews Abraham – performance of The Ghetto is not our home at the Old Location Cemetery and Penduka, Goreangab Dam)

I think both can learn from each other and other writers beyond our borders. Especially when it comes to creating innovating work. I have seen a lot of work that leans towards western productions instead of texts that are influenced by our indigenous backgrounds in terms of content, form and concept. I think writers need more support spaces. Both College of the Arts and University of Namibia arts courses do not offer writing at the moment and this is worrying. Writing education is not diverse enough. Namibian texts are poorly archived and not published especially in the last decade.

4. What’s the first hook that gets a new play started for you? Is it an image, a theme, a character?

The concept. I love conceptual thinking because it creates open spaces for ideas to flow freely beyond the text. Plays that challenge traditional forms. Plays that are deeply embedded in their indigenous cultures. Plays that are process-based instead of a product or finished texts that can be thrown in the dust bin during the rehearsal process because they were only there to start the process. Texts that allow both actors and audience to re-write.

4. Who are some current creators you follow and think should get more attention?
More makers than playwrights. Performance Artists such as Veronique Mensah, Tuli Mekondjo, JuliArt, Dorothee Munyaneza (Rwanda) & Ogutu Muraya (Kenya).

5. What do you think are the main obstacles they face to getting wider recognition?
Accessing wider audiences and international markets because we are isolated from the rest of the world as an industry. Again, I wanna highlight our education system and how it is failing our children. There aren’t enough publishers and residencies for writers. My dream is to actually start an informal learning and culture space for writers and performers to cover industry gaps that are not considered by existing institutions.

7. If you could change just one thing about the Namibian theatre industry with the wave of a magic wand, what would it be?
I’d pay artists more and we would have an on-going theatre. Theatre makers would be making work non-stop and there would be more exploration of unconventional spaces like site-specific theatre and public art. In my ideal world, theatre and performance education is decolonized.

8. What writing themes intrigue you?

I feel like we lost resistance culture as a nation. Or rather, it is displaced. In my processes, I touch on healing and transformation. Anything that fights Heteropatriarchy, racism, ableism, Afrophobia, capitalism, is my cup of tea.

9. People say theatre in Namibia is expensive. What is your take on this?

I think when people say theatre is expensive, they just mean that it is not accessible. I have this idea I’m currently developing that argues that theatres and museums are not built for living bodies, they are built for dead bodies. Artists are poorly paid because the theatre needs to cover their expenses, so artists are just used as objects. Institutions are violent. Indigenous African theatre was not always in some building isolated from the world, it was vulnerable to split-focus and disruption. I am a proponent on the education of both artists and the public about the importance and relevance of theatre.